Beyond the Winter Doldrums

- February 21, 2016
It's February, post-Imbolc, and the cabin fever is running pretty high. Here in Wisconsin, it's been fairly warm, and much of the snow has melted, but it's still grey and chilly and little fun outdoors. We have, however, been keeping reasonably busy, and that chariot will probably keep rolling on for awhile.

We may or may not have a new episode before the end of the month. Recording happens at the end of this week. We're doing a "Generations" episode this time around. Unlike the Pagan Parenting duology, this one is meant to look at generational differences within the (local) Pagan community. It's an assessment based on age.

We've noticed that some older Pagans have different affinities and influences than we have which have drawn them to or kept them on a Pagan path. We're going to explore that a little with some friends of ours. Beyond that, as older Pagans age and eventually pass on, what are we losing in the transition? Who's chronicling this stuff for the ages to come? How do different generations connect and nourish one another? There might even be more talk about the Triple Goddess and how that does and doesn't work for everyone. Not sure yet, but we're sure to find out. 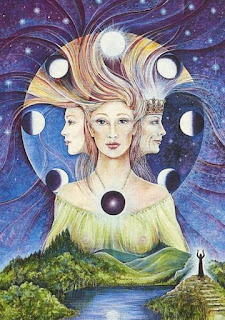 The other episode we wanted to record was going to be a look at dating and relationships from a Pagan perspective. Unfortunately, we've had trouble putting this one together. In particular, assembling an appropriate diversity of guests has been the challenge. We still hope to do this one eventually (and do it justice), but it's probably not happening yet.

Most likely, we're going to examine another film instead. We're not saying which one, but we've mentioned it before and it's streaming on Netflix. While at least one of us has seen the 80's wonder film Teen Witch on there recently, it's highly unlikely we're going to touch that one. For now. Maybe never. Probably never.

Episodes aside, we're looking forward to Paganicon next month, organized by Twin Cities Pagan Pride. We've been to other conventions before, but this will be our first genuinely Pagan one. We're bringing a whole gang of our local Sconnie Pagans to terrorize the poor people of Minnesota. Should be a good time! If we're lucky, we might get to talk to some folks there for the show, too. If not, we'll have to settle for talking about the experience ourselves. Either way, we're excited.

For now, and until our next episode and/or blog post: Peace out and Pagan on!

Popular posts from this blog

- March 13, 2019
In what may be the final episode, Amanda, Aimee, and Jacob reflect upon the podcast with gratitude. Part exploration, part retrospective, and even part mailbag, this episode marks the end of one era and the beginning of another. How does paganism typically handle endings, afterlives, fate, and destiny? What illuminations might be found in our places of uncertainty? Is there power and potential for growth and change in quitting? And what, if anything, might be next? Mentions: - Why I Quit My Dream Job In The Music Industry, by Casey Dienel: https://blog.usejournal.com/why-i-quit-my-dream-job-abaa4b8bfa61 - Why Is There Suffering? A Modern Pagan Response, by John Beckett: https://www.patheos.com/blogs/johnbeckett/2019/02/why-is-there-suffering-a-modern-pagan-response.html - Brad Warner: http://www.hardcorezen.info - Spirit Circle (manga): https://us.macmillan.com/books/9781626926011 - Once Upon a Squirrel (Aimee's writing blog): http://www.onceuponasquirrel.com/ - The Arcan
Read more

- February 11, 2019
In traditions ripe with fertility rites and symbolism, where do folks on the asexual spectrum fit in? How do we work together for greater inclusivity of asexual, demisexual, and gray sexualities? And what might more asexual forms of Paganism look like? In this episode, Amanda, Aimee, Jacob, and special guest host Liz go aces wild to find out... and somehow talk a lot about sex along the way. Mentions: - Deeply Rooted: https://www.deeply-rooted.org/ - Paganism and Asexuality, by celestinenox: https://celestinenox.wordpress.com/2017/07/10/paganism-and-asexuality/ - Wicca / paganism and asexuality (Amino Apps): https://aminoapps.com/c/acealliance/page/blog/wicca-paganism-and-asexuality/ - Cupid and Psyche: https://en.wikipedia.org/wiki/Cupid_and_Psyche - J.M. Barrie: https://en.wikipedia.org/wiki/J._M._Barrie - Won't You Be My Neighbor? (documentary): http://www.focusfeatures.com/wont-you-be-my-neighbor/ Links: - Website: http://www.thepriestesses.com - Email: thepriestesses
Read more